Ron Thom, Architect showcases the life, work, and creative forces behind one of the most important Canadian architects of the 20th century. 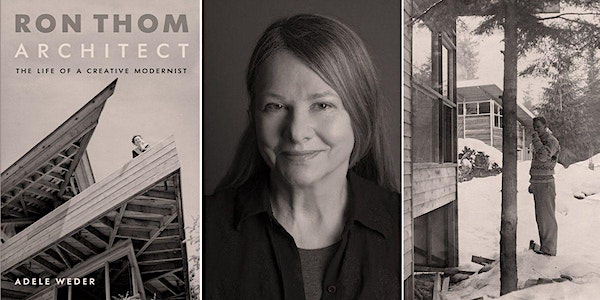 Ron Thom, an architect of unique genius, fought to instill the human spirit in our built environment. In 1963, he moved from Vancouver to Toronto and became nationally renowned for Massey College, Trent University, the Shaw Festival Theatre, the Toronto Zoo and many other projects that continue to inspire generations of architects around the world.

This definitive new biography delves into the creative society that shaped him, whose denizens included Jack Shadbolt, Arthur Erickson, John C. Parkin, the Massey family, Barbara and Murray Frum, and Robertson Davies. Based on over a hundred recorded interviews and extensive archival research, Ron Thom, Architect sheds new light on one of the most important architects of his generation, and on a transformative era in our design history.

Adele Weder is an architectural writer and cultural journalist, and a contributing essayist of Canadian Modern Architecture and several other architectural books and journals. Her exploration of the work and life of Ron Thom began with her 2005 master’s thesis on the design approach of Thom’s mentor, artist B.C. Binning. Weder curated the nationally travelling exhibition Ron Thom and the Allied Arts, which exhibited at the Gardiner Museum in 2014. She currently lives in Vancouver and Haida Gwaii, British Columbia.